Disclamer! I don't own Danny Phantom it belongs to Butch Hartman!!!

Here is mainly fanart of Danny Phantom characters but I do have some of my own characters. So let us begin!

Home base page
Adventures of Pyre 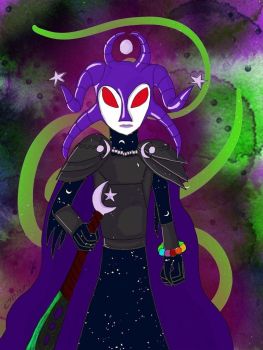 Here I desided to draw Nocturn in armour, with a helmet redesign and added a sword and well cape. Because why not?
On Deivant art I called it Warrior captain Nocturn but I spelt his name wrong. 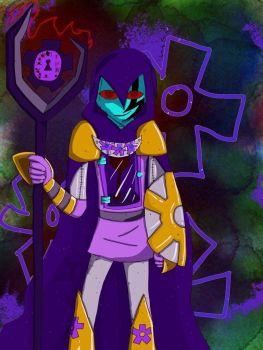 I contiued to do more characters in armour and ended up doing Clockwork(here), Danny Phantom, Undergrowth and my own Character Death.
Because they have a ghost of dreams (Nocturn), a ghost of time (clockwork), so why not a ghost of Death.
Anyway with Clockwork I just added a bit of armour here and there, changed the design of his staff a bit, and gave him a shield.
I called the drawing Warrior leader Clockwork. 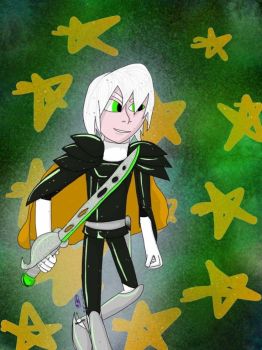 Just so you know I find drawing humans hard so I didn't really like how Danny turned out, but I'm going to leave it.
Here I turned Danny's HASMAT suit into armour (well put the armour on top really) and also gave him a sword and belt height cape(ish).
I went for a sword for Danny because he seems to know how to use one, he did fight Vlad in the air with one. 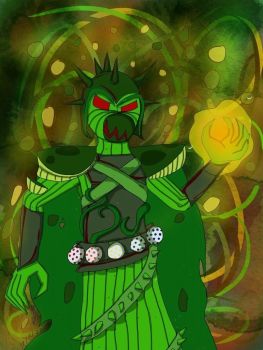 Undergrowth was some what harder then the others, since he isn't one of my favorite characters but he seemed like a good one to do and I don't draw him as often.
Adding the armour was also hard because he already wears plant armour, but I managed to do it!
I also gave him bombs containing things like poison because why not? I ended up calling him Warrior Undergrowth. 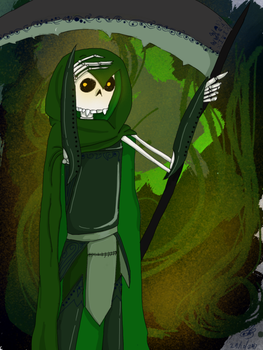 This is my OC called Death. As I said earlier they had a ghost of time, dreams and plants but not a ghost of death. So I made one.
I also used what people generally would connect to as him being Death. Since it is mainly described as a skeleton, I made my character a skeleton with a hooded cloak and synth.
I decided that his character could also change it's shape to be like what others think Death would look like. But he would mainly be drawn in a skeleton form in my drawings.
On DeviantArt I called him Warrior Death. Again why not? 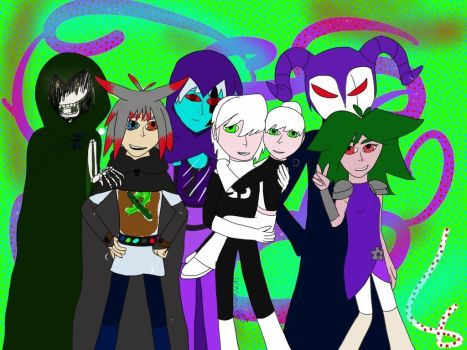 Back row: Death(oc), Clockwork, Nocturne
Frontrow:Aeron(oc one of two apprentice of Death),Danny Phantom, Dani Phantom. Nova(oc apprentice of Nocturne)
So in the drawing done as a group photo you can see I have got another two of my own characters. Aeron and Nova.
Aeron the apprentice of Death with his brother. (I keep forgetting his brothers name.) Has gray hair with red tips, multi colored eyes.(I seem to have a thing for multi colored eyes don't I?) His outfit consists of blues and grays with colored gems on his belt and wrist.
Each of these gems represents one of each of the ghost cores. They are used as part of his power and synth.
Nova the apprentice of Nocturn, has green hair, read eyes and her outfit is mainly purples and whites. She has a scare on her right arm that plays a part in her death.
When I designed her I put the gear shaped parts on her dress because I wanted to have her be the apprentice of Clockwork, but I went with Nocturn instead. But she helps both.
I didn't want to change the design of her and I already had a back story, so I went with the back-story/ her death, playing into her design again. Besides it looks weird with stars in place of the gears.
I drew this on the Ipad so it turned out a bit weird. Then again i drew the other pictures on the Ipad. Maybe I was tried. Meh.

This is my latest drawing of Nova.
While I was drawing the background for her on Gimp, Gimp crashed and deleted what I had done. Luckily for me I was recording it to do as a speed draw. So I screen-shoted the picture.
The moral of the story. Don't listen to music while using Gimp on the same the device.
Actual it is save your work as you go!!!
I should have known that by now...
Home base page
Adventures of Pyre


Gonna catch them all! Because he's Danny Phantom!